There’s a lot of interesting stuff that happens in our day to day life in India. I find most of it quite extraordinary because it’s so much different from our daily lives back home. I’ll even go as far as to say it’s like being on another planet. It’s that different. Piecing together some of those daily experiences into a blog post can be challenging. It’s interesting to me while I’m here experiencing it, but I’m never really sure it will hold your attention.

The more I travel the more I learn to be open to whatever is coming next, to let go. We spent the last week in Bombay and I haven’t written much about that – yet. But this week we find ourselves in Vapi, India at Shree Swaminarayan Gurukul. I wrote a lot about this place few years ago when we spent 10 days here. It was one of the major highlights of our last trip and I’ve been looking forward to being back here. It’s an educational campus with about 3000 students during the day and a residential population of about 100 on site. They’re great people and do great work. Free education for poor girls. Feeding people in hospitals. The place was founded almost 40 years consisting of a plot of land right next to the highway in Vapi. A couple of Swamis (monks) had an idea to create a school. The first year they had 7 students. Today the 2 founders are still here and have grown the idea into a multi-million dollar, socio-spiritual, non-profit organization. They survive on tuition from the day students and donations from people who support their mission via donations. This is the story of one man who who supports this, and many more organizations in the area.

This past Monday morning, Laurie and I were headed out the front door on our way to another campus an hour away in Chiklee. As we stepped out the front door and reached the bottom of the steps we crossed paths with Swami Kapil who was talking with a tall older man dressed in white. The man, Gafur, spoke little English, and was very friendly as we were introduced. He let us know that he was 85 years old. Swami Kapil told us that Gafur owned a factory nearby and was a big donor to the gurukul. No more than a minute had passed. Gafur turned to us and invited us to the factory for lunch tomorrow. We accepted. 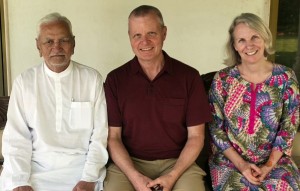 On Tuesday morning we set off with Ram Swami heading to Gafur’s home which was close by, right here in Vapi. This is a good time to describe the setting in Vapi. Vapi has its poverty like most of India, but there is also a small center or downtown where coffee shops, western style eateries, stores and even ice cream shops are popping up. The description below is not mine, but from Wikipedia.

Vapi is known as the City of Chemicals, it is the largest industrial area in Gujarat in terms of small-scale industries. 12 years ago it was the 2nd most polluted places in India, mainly due to its poor air and water quality caused by nearby industrial sites. As of 2018, the pollution has come down significantly. Other major industries include paper, packaging, pharmaceuticals, plastics, rubber, textiles, wood, computer hardware and software, engineering workshops, glass, and food products. Another striking feature of Vapi is the Common Effluent Treatment Plant (or CETP). This is the largest of its kind in Asia[5] and one of India’s biggest effluent treatment plants in terms of capacity, treating the pollutants from these industries before the effluent is released into the river. It has a major highway and railway running right through the city.

When we arrive at Gafur’s home we are greeted and invited into an office type room where we sit. Juice is brought in, but we kindly decline. We’ve brought our own bottled water. Our digestive health has been fine so far as we’re seasoned travelers and really mindful of what we touch and put in our bodies. We have to say no a lot, or risk getting sick. Gafur moves about the room, all dressed in white again, talking in Gujurati, his native language, and handing us books and even a statue of Vivekananda. Gifts for us. There is another young man in the room, Varun, who speaks English. He will be our translator for the day. Within a few minutes we head to the cars and are on our way to the factory. 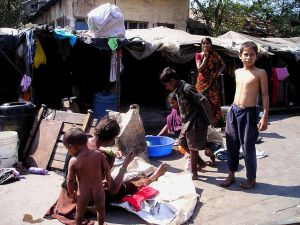 We travel down a side road for just a few minutes, passing rustic, ramshackle homes, cows wandering around – a typical rural Indian scene. We quickly arrive and pull through an entrance gate to Meril Life – a global medical device manufacturer.

Meril manufactures medical solutions in the form of vascular intervention devices, orthopaedic supplements, in-vitro diagnostics, endo-surgery and ENT products. It is our core commitment to ensure the delivery of advanced healthcare solutions. Our inclination towards research and development is reflected in our diverse offerings. We ensure that we adhere to the best quality of standards in manufacturing, scientific communication and distribution to deliver path-breaking healthcare products to the world. 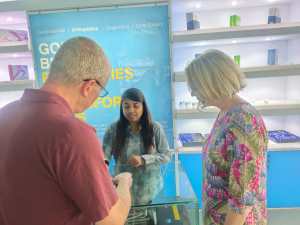 The walled grounds enclose over 180 acres and 300,000 square feet of work space. The entrance road winds, twists and turns and then 2 large, ultra modern buildings appear right in front of us, over 7 stories tall. They seem uncomfortably out of place bordering the poor rustic neighborhood outside, but that is all hidden by the acreage, walls, landscaping and many trees.

We pull up to one of these buildings and greeted by security personnel and doormen. The inside is absolutely beautiful. Gafur turns to me and smiles, waves his hands all around and says “All FDA standards.” We are quickly escorted to a changing room where we put on hair nets, shoe covers, and sterile lab coats. Through a security door and into the “factory”. The factory is so high tech that it’s blowing my mind. The manager begins the tour. This facility makes replacement knees and hips. There are detailed explanations of the materials, processes and quality of the different items. There are state of the art machines AI (artificial intelligence) from Mazak producing various items. There are samples of the products, made from different materials, all for show and tell. It was really interesting. 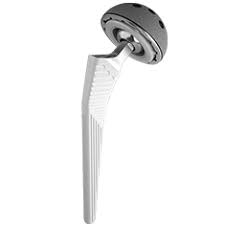 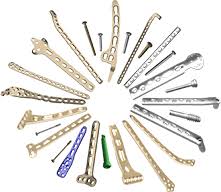 Meril employs over 4000 people, all locals. So they’ve solved an unemployment problem right here in Vapi. The tour continued around campus and we headed to the HR department and met the Head of Human Capital and Administration. Everyone we met was so proud of this company. Next we drove over to the “Academy” building passing by manicured lawns, a cricket field, a golf course (I think), a clubhouse (definitely), trees, flowers and more. The employees at the Academy do not have offices, they work via laptop anywhere in the semi open air building. This is where people all over the world come for conferences on the medical devices and equipment that Meril makes. There were even a few theaters where attendees could watch, in real time, surgeries that were taking place around the world, where Meril’s products were being “installed.” 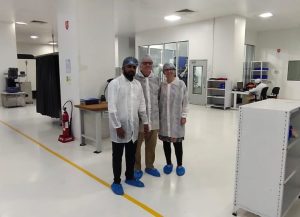 Then it was time for lunch. We headed to the clubhouse where we toured nicely appointed suites where international guests, surgeons, etc., stay while visiting the factories. We were seated in the dining room where we met the GM of hospitality and grounds. He told us he had been there for a long time but used to manage the Taj in Bombay. As lunch was served my curiosity was piqued and I began to inquire about how and when our host, Gafur, came to start this thriving business. Varun, acting as our translator shared the following information. Gafur started an ink and printing company – Hindustan Inks & Resins – from scratch and built it up over many years. He sold the company for a ton of money. With that money he and his 3 sons started Meril about 13 years ago. It is a privately held company. Varun also shared with us that our host, 85 year old Gafur, was heavily involved in charity work. We scrolled through accounts of various humanitarian work that Gafur has done. Thousands of proper weddings for poor, fatherless Indian women. Adoption for orphans. Clothing, feeding, housing and medical care for many Indians . Story after story during and after lunch. 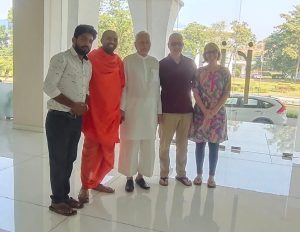 Early afternoon we strolled around the outside of the clubhouse, talking, translating, and finally thanking him one more time. A chance encounter in an out of-the-way-place that few, if any other Americans have ever visited. An invitation to lunch and a mind-blowing factory tour. And stories of a successful man who spends his wealth helping others. It was quite inspirational. On the car ride back we heard another story. Gafur also covers the salary of 10 local school teachers. What a man. It was an honor to spend the day with him.

Some holy men build temples. Some holy men feed and educate the poor. These days I’m hanging out with the latter.

3 thoughts on “Another Chance Encounter”